My boyfriend, Adam, and I attended Winnipeg Folk Fest for the second time this year. Even though there were some areas in which we were a tad disappointed in, all in all it was a wonderful time and we made some unforgettable memories.

I do have to say that my favourite performers this year were Reuben and the Dark as well as The Strumbellas, The Bros. Landreth and Michael Bernard Fitzgerald! There were many talented artists there but those performers seem to have grabbed my attention quite well. Although to be fair, I knew ahead of time I would love The Strumbellas and that I would not be disappointed by Reuben and the Dark. I did listen to there albums more times that I can even admit.

The weather was quite lovely wednesday through friday but saturday and sunday ended up being rainy and cloudy. Truthfully, we barely attended on sunday because the weather ended up incredibly cold and it was down pouring, which we were just not into. But saturday, when it rained, it really added to our Folk Fest fun! We ended up under a Beer Tent, packed in with as many people could possibly squeeze together, and we conversed, sang and even did a little bit of dancing. It was one of those experiences you just can’t plan on having! I did feel bad for those people who ended up hiding out in the port-a-pottys. That must have been a smelly hour…

We also met up with some friends during the week and weekend, which really adds to the fun. Listening to music, sitting on a blanket in the middle of a forest, sipping on delicious coffee, eating yummy treats, and barbecuing on the back of a truck is really just such a good time! But mostly, it is the way people gather together to share the love of music that makes it such a great experience. I cannot wait till next year! 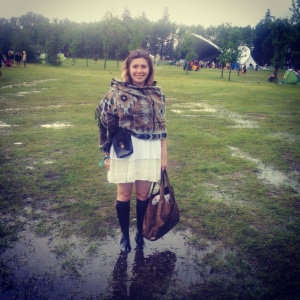 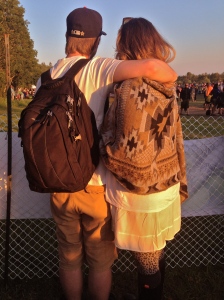